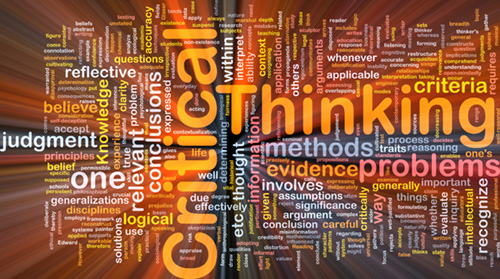 We are drowning in misinformation and misleading claims.  Save yourself with the essential skills of science literacy and critical thinking.  Understanding the process of science and how to draw reasonable conclusions from the available evidence can empower you to make better decisions and protect you from being fooled or harmed.  It is especially important to guard ourselves from pseudoscientific and irrational beliefs.  Arguments for a claim must be logical.  Arguments consist of a conclusion, or claim, and one or more premises that provide evidence, or support, for the claim.  In effect, the conclusion is a belief, and the premises are the reasons we hold that belief.  This reasoning pattern is called a Syllogism and it generally consists of major premise, a minor premise, and a conclusion.

Major= When it rains there must be clouds.

Minor = It is not raining.

Conclusion = Therefore, there are no clouds.

Although the major premise is verifiably correct, and the minor premise gives us a conditional attribute, the conclusion drawn is patently false.  For we all know that there can exist clouds but no rain.  Here is an example of a valid syllogism: [Given].

There are many college and online courses that you can enroll and access that will help you build your critical thinking skills.  Acquiring these skills is no small endeavor to be sure and would require time and intentionality.  What I can share with you tonight are fallacies of logic, that if understood, can help you spot claims that are inherently suspect.  I obtained these tidbits from an article written by Melanie Trecik-King, (Skeptical Inquirer Journal, March/April 2022).  She is an Associate Professor of Biology at MC College and is the author of a book entitled, “Teach skills, not Facts.”

Here are those tidbits:

Vague claims-Claims that are undefined, indefinite, or unclear.  For example, your horoscope for today says “Today is a good day to dream.  Avoid making any important decisions.  The energy of the day might bring new people into your life.”  Because this horoscope uses ambiguous and vague terms, such as dream, important, and might, it doesn’t make any specific, measurable predictions.  Due to legal restrictions, many alternative medicine claims are purposefully vague.  Another example, a supplement bottle says it “strengthens the immune system” or it “reduces fatigue.”  Although these sweeping claims are essentially meaningless because of their ambiguity, consumers often misinterpret them and wrongly conclude that the products are effective.

Ad hominem-Attempts to discredit an argument by attacking the source by disparaging his character in a manner unrelated to the argument.

Appeal to false authority-Claims that something is true based on the position of an assumed authority.

Appeal to emotions-Attempts to persuade with emotions, such as anger, fear, happiness, or pity in place of reason or facts.

Appeal to nature-Argues that something is good or better because it is natural.

Appeal to tradition-Something is good or better because it has been around a long time or “Because we have always done it that way.”

Hasty generalization– Draws a broad conclusion based on a small sample size.

Red Herring-Attempts to mislead or distract by referencing irrelevant information

Confirmation bias– Tendency to search for, favor, and remember information that confirms our beliefs.

Lastly, let’s address that which constitutes evidence: Not all evidence is created equal.  The evidence must be reliable and the source reputable.  A major reason science is so reliable is that it uses a highly disciplined and systematic method of collecting and evaluating evidence.  The evidence must be comprehensive, peer reviewed, and the results replicable.

Pseudoscience is a collection of beliefs or practices that are portrayed as scientific but aren’t.  Pseudoscientific beliefs are motivated by the desire to believe something is true, especially if it conforms to an individual’s existing beliefs, sense of identity, or even wishful thinking.  Because of this the standard of evidence is very low.  Examples of pseudoscience include various forms of alternative medicine, some New Age beliefs, and the paranormal.  Here is a good rule to rely upon: “Extraordinary claims require extraordinary evidence.”  Essentially, the more implausible or unusual the claim, the more evidence that is required to accept it.