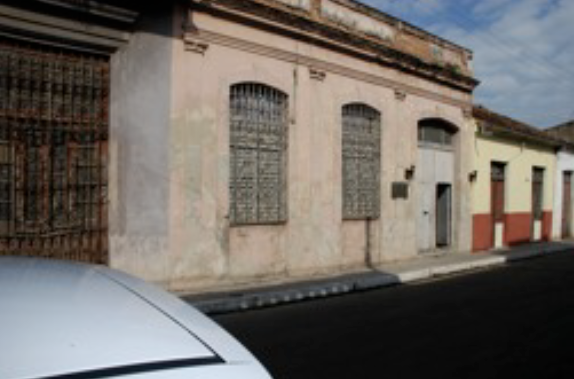 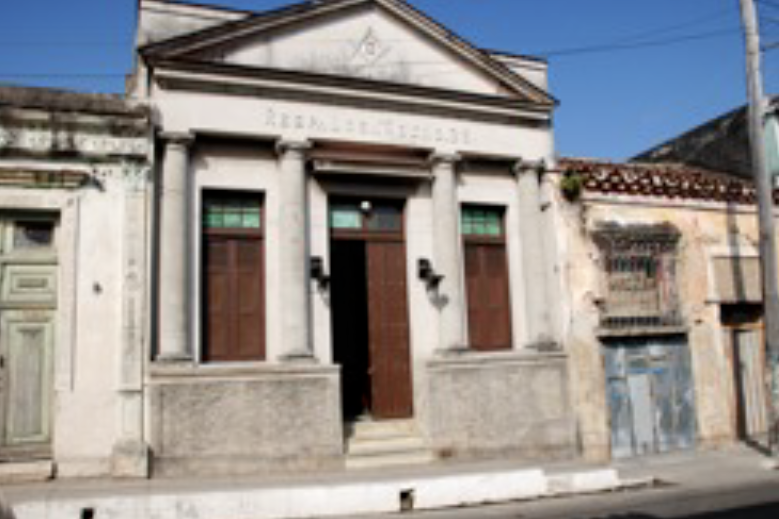 A Visit by George Thelwell

R.W. Bro. William Bain and I travelled to Varadero Cuba from January 10, 2008 to January 20,2008. I had only ever taken the escorted bus tours. This time we rented a car and did some exploring. We stayed at the Corallio Resort about halfway along the peninsula.
After we had been at the resort for a few days, one of the bartenders found out that we were masons. He was happy to find out as he had been accepted as a candidate for a lodge in his hometown. We told him that we would be interested in seeing a Cuban Lodge Room and he introduced us to Luis, one of the gardeners at the resort. Luis was a member of a small lodge in Matanzas a town of about 500,000 approximately 50 kilometers from Varadero.
Luis guided us to Matanzas and took us to his lodge (The one pictured top left). This was the smallest lodge room I have ever seen.

We were shown around by the master, secretary and several other brethren who had been playing dominoes when we arrived. I wasn’t sure when we entered how one could actually do any work in this lodge room because of its size, but I was assured that the 50 or so members managed quite well. There was no banquet room but a courtyard was where the members gathered to have a few drinks and light refreshments after lodge. These refreshments were provided by the members or the newly admitted candidates. There was a kitchen at one end of the courtyard next to the washrooms. In the foreground of the picture at the right is the ante room and area for the secretary and “domino players.”

Their regalia is a little different as you can see from the floral border and the lack of tassels or buttons. (see below)

From this lodge the master took us to see another lodge, Lodge Sol, just a few kilometers away. This was a much arger lodge room and it was quite impressive.

The first thing that I noticed when I entered this lodge room was the steps. There are five steps to the SW chair and seven steps to the WM chair. These steps were made from marble and on the riser foreach step was a word. Anyone who has ever had to memorize the SW lecture in the second would have had no trouble in identifying the five orders of architecture and the seven liberal arts and sciences. These steps would have made that lecture a piece of cake and would have truly added meaning to “The rest in the West.”

The most impressive part of this lodge was the candidates preparation area. The candidate is placed in the area with the bunk and desk and told to write the predominant wish of his heart and why he wants to become a mason. He is then lead past the adjoining room where he is prepared to be taken upstairs to the lodge to be initiated. I can tell you that had I been given that start to the initiation, I’m not sure I would have continued. The desk holds a candle and a human skull and is illuminated by no more than a 10 watt bulb. The open grave is littered with human bones and the wall contains what look like 6 tombs.

When we returned to the resort, the other bartender, Alberto, had questioned whether we were masons. He told us that he wasn’t, but a friend of his was. He then invited us to his house to meet him and to share in a lobster dinner.
The next night we went to Cardenas, about 20 kilometers east of Varadero and had dinner with Alberto Serrano, his family and Jose Luis Trujillo a past master of Logia Masonica Cardenas. Jose, being a past master of a lodge, was understandably concerned that we might be cowans. I showed him my tattoo and we went through a board of trial. The board of trial was more difficult than it is here in Ontario, since neither Bill or I speak Spanish and Jose spoke no English. We managed however to come to a meeting of minds through the demonstration of some signs tokens and words that are, thankfully, universal.
After a terrific meal we went to visit his lodge and it was a second floor lodge room with marble steps from the ground floor entrance. The room was spacious and it had the same lettering on the marble steps to the WM and SW chairs. The pictures on the walls were hand done frescos and done to perfection. Jose also showed us another building further south in Cardenas which was a concordant body.
I have seen similar artwork done as prints in some American Lodges and a few Canadian Lodges, but never done so large and painted by hand. Some brethren may recognize the similarities between the ceiling in Cardenas Lodge and that of the Annette Street temple that we call home.
The floor of this lodge was fully tiled in black and white and from the east one looks past the alter then between two great pillars towards the WM chair. In Cardenas there is a space in the altar that would hold mortal remains. The Great Light, square and compasses are left on the altar. At the base of one of the pillars rests a perfect ashlar in the shape of a pyramid and at the base of the other, a set of wooden working tools.
Masonry is alive indeed in Cuba and all of the brethren that we met were enthusiastic about their lodges and the place masonry held in their lives.
I had always thought that Masonry was practiced well here in Canada, but to visit lodges in other parts of the world certainly broadens ones horizons. Every mason and applicant for Masonry we met greeted us warmly and offered whatever he could to make our visits enjoyable. There was a genuine warmth that transcended polite hospitality. Alberto ensured that we got exemplary service throughout our stay and went out of his way to provide an introduction to Luis. Luis not only guided us through his city and lodges, but opened his home to us for coffee after our tour. Alberto provided us the opportunity to have a true Cuban feast of lobster with his family and friend. He left the room so that Jose could conduct a board of trial before dinner. Jose invited us to attend lodge with him and his brethren and was genuinely disappointed when he was told we had to leave the day before his lodge was meeting.
If you get the chance, Visit Cuban Lodges and revel in the beauty and grandeur that is Masonry in Cuba.